Back in the early days of my Hifi hobby aka obsession there was a section of the Hifi Press notably led by HiFi Answers magazine who swore by the mantra of “source first”. The idea was to spend as much as possible on your turntable because if you lose information at this stage you can never get it back (and CD was yet to be invented, so vinyl was your primary source). A further argument was made that revealing speakers would make a mediocre source sound worse.

This meant that at the extreme, people were recommended to buy systems consisting of a Linn LP12 turntable with a cheap but well regarded amp such as the NAD3020 and speakers such as AR18s with maybe 80% of the budget allocated to the turntable. At the time my system had 2 out of the 3 components listed but budget constraints meant they were paired with a Dual CS505/2 turntable.

Companies like Linn produced cheaper arms and cartridges ( in true Linn style, theirs were called Basik) to encourage those wishing to go down this route.

Rather than debate if this is the best possible way to spend your money ( there are at least two answers, at least two thousand opinions) I would pose the more basic question.

What is the source?

In a vinyl based system, is the source not the cartridge as the first part of the audio chain? Even if the turntable is regarded as one source component, then within that, where is the logic for an expensive turntable but budget tone arm and cartridge? The reality is that a turntable is a complex system with the ultimate sound determined by component quality, interactions between them and external influences such as the support for the turntable. An expensive cartridge will not give its best on an inadequate tone arm on an inadequate turntable

In a digital system, the source could be regarded as the disk player or NAS drive where the digital file is first extracted or the streamer which pulls in the file from a remote server. Again a complex system with the ultimate sound determined by component quality, interactions between them and external influences such as digital noise sources.

For myself, if the source is to regarded as the limiting factor then logically the recordings themselves are the source of the audio chain.

There is empirical support for this view from listening to some records (you know who you are, Lynyrd Skynyrd) and hearing no improvement as the reproducing system is improved. 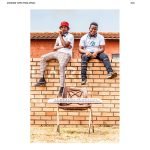